With inspiration from my new rule, I spent some time researching primitive methods of trapping small animals.  I came across some information about a classic box style trap held up by a stick.  You can't get any more simple than that.  The one I made today at lunch time involved three sticks and a Tupperware tub.  The sticks are carved in a way that creates something called a figure-4 trigger.  It resembles a number 4 and props the container up on its edge until an animal comes along and triggers the trap to close shut.  I used peanut butter and a couple walnuts for bait.  We'll see.  I am thinking a squirrel or rabbit will be the most probable varmint in my yard to set it off.  Unless, of course, one of the cats gets curious and has a desire for peanut butter.

On my down time at work today I got to thinking about various other food sources that may be available to me.  I just don't think that I've been creative enough and I'm sure there are many other avenues to explore out there.  For some time now I have pondered the idea of trapping small animals like rabbits, squirrels, ducks, geese and wild turkeys.  I am open to that but my family (Debbie in particular) will not love me anymore if I become a 'murderer.'  So here's my plan. . .

Read more »
Posted by Doug Peterson at 5:29 PM No comments:

I woke this morning in time to get to the first of two softball games starting at 9 am.  Needless to repeat I have been quite energy drained and this morning was no exception.  I had little more that rice and water for breakfast and headed out to play ball with a water bottle in hand.

To my surprise, I played exceptionally well and hit the ball about as far as I have ever hit it.  Now that is pretty impressive.  I was very exhausted after the games.  On my way home I decided to stop at Sickles to shop for my week 1 rewards (VERY excited!) as well as dinner for Debbie and the kids.

Read more »
Posted by Doug Peterson at 11:15 PM No comments:

The weekend is finally here and the weather has been quite good so far.  In fact, it was so nice today that I decided to brush off all of my spearfishing gear and jump into the ocean in search of some fish.  Brrrrrrrr! Guess how cold? It was a frigid 49 degrees.  That initial plunge into the water sent shockwaves of chills running throughout my body.

It was high tide and the surf had some pretty big waves.

Read more »
Posted by Doug Peterson at 12:00 PM No comments:

I am exhausted.  The energy drain is very noticeable and the mental challenge is definitely here.  Today I had some time mid-day so I thought I would be nice and drive Ty, my son, and his friend Gavin to lunch.  They chose Five Guys and as soon as I walked in I had to leave.  I let them eat by themselves and waited in the truck.  I wanted those fries so badly.  And when the kids were finished, Ty brings back a bunch of fries in the truck to take with him.  Uhg!

Read more »
Posted by Doug Peterson at 12:00 PM No comments:

While at work today I got my pre-survivor diet blood test results back.  A nurse phoned me and asked me to make an appointment to see the doctor to review my cholesterol numbers.  Apparently they were quite high.  She told me the LDL was 236 anf the total cholesterol was 340.  I am going to look that up soon to see how 'off the charts' those numbers are.

I also did a blood pressure check

Read more »
Posted by Doug Peterson at 8:13 PM No comments:

Day 3 - Fish, fish everywhere but not a one to keep.

Unfortunately, the bee delivery was delayed and I will have to wait at least another week to get the bees for the hives.  Instead, I dedicated the majority of my time today to catch a striped bass.    The weather broke and it was rather nice out.  A perfect day to dunk the boat for the first trip of the season.  I have been reading many good reports of striped bass in the upper Shrewsbury River and that's where I headed.

Read more »
Posted by Doug Peterson at 2:22 PM No comments:

Day 2 - Preparing for the Long Journey Ahead

I purchased a new (used) video camera this year and I am making an attempt at a documentary.  It's not easy.  The toughest part is narrating on camera while still trying to make it a bit entertaining and not boring.  Hopefully I'll get the hang of it.

In addition to trying to organize my documentary, I have ordered a package of bees to repopulate my bee hives.  Unfortunately my bees fell victim to the storm last October and were all killed in the flood.  I could have saved them too by placing the bee hive up on the deck of my boat.  I had no idea that the water would ever come up as high as it did though - no one did.  I am determined to start anew and hopefully learn from some of the mistakes I made with the bees last year.  I got a little honey from them late in the summer but it really takes about 2 seasons to start to reap the rewards of the honey bees.  So although I am getting bees again (tomorrow in fact), I don't expect there to be any honey for the Survivor Diet.  I am planning for the future (just like the asparagus).

Next on my agenda is to explore the many uses of a kite.  Sound strange? read on.

Read more »
Posted by Doug Peterson at 8:43 PM No comments:

Nothing quite epitomizes the Survivor Diet Challenge as much as this photo of the dandelion: 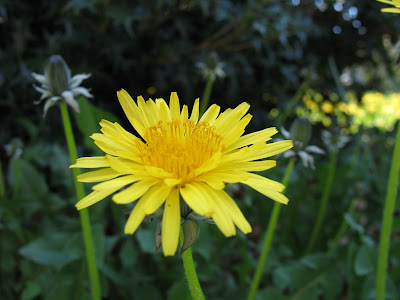 From a nutritional standpoint, I truly believe that you could survive on water and dandelions - if only you could get used to the taste.  Don't get me wrong - it's not terrible.  But there comes a point when you eat a certain amount of dandelion greens, that you just can't stomach any more.  I hit that point about 3 years ago.  (and haven't really recovered since)

Happy Earth Day everyone - the perfect day to kick off the Survivor Diet.  Unfortunately we have hit quite the cold spell in the weather today and it is forecast to continue through the week.  The first of many obstacles I will be facing in the next 40 days.

On the menu today are brown rice, clams, asparagus and water.  That's right - asparagus!  Wow - a new food to the SDC.  Last year the garden produced a bunch of young asparagus stalks that were tempting to eat but I was not allowed.  This year what has come up is nothing short of remarkable.  Large full asparagus stalks.  I cut 4 off for today and steamed them with my rice and clams.  There aren't that many yet so I will have to be smart about what I take from the garden.

Posted by Doug Peterson at 8:40 AM No comments:

The Dawn of a New Survivor Diet Challenge

The winter has not been kind.  We had a storm of the century (Hurricane Sandy) and it really took its toll on the area.  As people rebuild their lives and their homes a feeling of "normalness" is just starting to creep back in.  It will be interesting to see how the devastation of the storm has affected the natural ecosystem.

It was also a somewhat lazy winter - what else is new?  I have put on the winter weight to the tune of about 25 extra pounds.  Yikes!  Spring has sprung and once again it is time to purge the toxins of a polluted lifestyle.  I have a renewed sense of enthusiasm this year and some plans for a variety of new adventures in survival.  Every year is a building block of new experiences and I'm sure this year will prove to be no different.

I have made some changes to the Official Rules and Guidelines as well as the Weekly Rewards.  Check them out when you have the time.  I have also slightly changed the format of this blog - pretty cool looking huh?  Learning from previous seasons, I pushed the timetable of the SDC back by about 2-3 weeks in order to let more crops grow and more seafood to migrate into the area.  The downfall is that clamming season ends at the end of April and this will be somewhat limiting.  The official start date this year is April 22nd and it will continue through May 31st (40 days).  I purposely started on a Monday and with some pre-planning, I will use the weekend prior to acquire some supplies for the initial week.  I thought about starting on Saturday but in the end I decided on Monday.  Whatever.

I have a plan to make a compilation of videos this year in the form of a documentary.  So if this blog is not updated daily it probably means that I am working on some video footage.  Following in the footsteps of people like Les Stroud - Survivorman, Bear Grylls - Man vs Wild, and Cody Lundin & Joe - Dual Survival, I hope to do justice to the suburban survival game.  Hey, not a bad idea for a new title - Suburban Survival Diet.  What do you think?

Well, whatever we call it, it's not just a diet.  It's a lifestyle and an adventure.  It's fun and exciting.  It will discipline and challenge you and teach you about things you didn't even know you didn't know.

Join me as I take on the 2013 Survivor Diet Challenge!

Posted by Doug Peterson at 12:06 PM No comments: