Day 3 - Fish, fish everywhere but not a one to keep.

Unfortunately, the bee delivery was delayed and I will have to wait at least another week to get the bees for the hives.  Instead, I dedicated the majority of my time today to catch a striped bass.    The weather broke and it was rather nice out.  A perfect day to dunk the boat for the first trip of the season.  I have been reading many good reports of striped bass in the upper Shrewsbury River and that's where I headed.
I called up my friend Brad and the two of us went on what felt like a wild goose chase for striped bass.  We ran up and down and all around hitting spot after spot after spot.  Ultimately we came up empty.  While pulling the boat out we saw a man cleaning three nice striped bass and a bluefish.  He told us the fish were there this morning - right where we were fishing.  Hmmm.  Something seemed fishy.

Later, in the evening, I decided to go out AGAIN and explore some local spots for about an hour.  Again I was skunked but I witnessed the catching and landing of four healthy sized stripers from two guys fishing from shore.  Sheesh.  These guys are fishing from one spot on the bank and land four fish and I'm motoring around all over the place and can't even get a single bite?  What's up with that?  I feel like I really suck as a fisherman.  I tried mimicking everything the other guys were doing but still no luck.  Later on, I read multiple fishing reports online with guys talking about this day being one of the best days ever for striper fishing!  It was like a slap in the face.

One fish would really be a big help so I will keep on trying in the eveneings after work if I have the time.  Tonight I had backyard greens with raw clams and some rice. 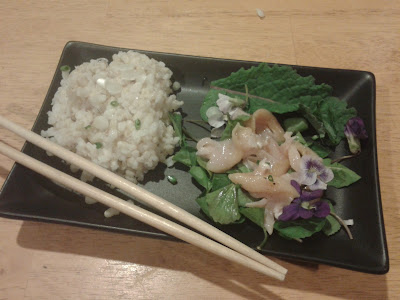 I try to make my meals look somewhat presentable so that they appear more palatable.  This picture actually looks A LOT better than everything tasted.  Ha!
Posted by Doug Peterson at 2:22 PM