My agenda for today was to get my rations of beans and rice and some containers to put them in.  I also have to get some greens from the lawn and I have a great idea for some seasonings (read on).  I have been trying to find some places to catch fish for the past couple of days but have been unsuccessful.  I am a little worried about that.
We are in the heart of winter flounder season, trout season officially opened two days ago and there have been great striped bass reports online lately.  However, I got skunked opening day and the next day for trout and yesterday I tried for some flounder in the Shrewsbury River for a few hours without even a bite!  I should have gone striper fishing on a charter boat today because of the reports but I didn't get up early enough and the party boats are already gone.  I guess I'll work on some protein later. 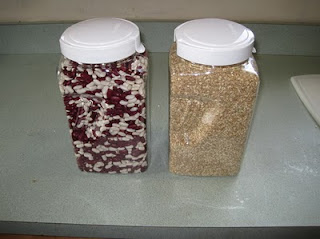 I went to Whole Foods and stocked up on red/white kidney beans and short grain brown rice.  I got about a gallon of each.  Then I went to Bed Bath and Beyond for a couple of gallon plastic containers to store my rations. 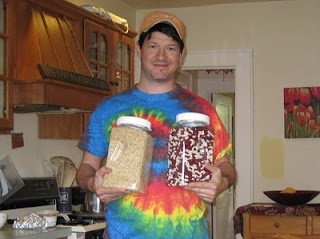 After that I took a ride to the beach to see if there were any signs of fish to be caught.  It was beautiful outside but the ocean was like a desert.  No signs of life anywhere.  No boats as far as I could see.  Nobody fishing.  So I bagged the idea of catching any fish and decided to work on my spices.  Last year when I did the Survivor Diet Challenge I gave myself some spices as a reward after the first week.  Salt, in particular was a very welcome addition to my meals.  It's amazing how much you miss salt after not having it.  This year I had the idea to get my salt from the most abundant source of salt on the planet - the ocean!

I brought a 5 gallon bucket with me to the beach but I didn't bring my waders and I didn't want to get all wet trying to fill my bucket with water in the waves.  I didn't have any rope either.  I walked out the end of a rock jetty and saw a place I could dip the bucket but it was a little out of reach and the rocks down by the waterline were dangerously slippery.  I searched for some rope and eventually found some old washed up rope between some of the rocks.  It wasn't very long so I had to untwist the strands and tie them together at the ends to make one long rope that I could use to get my water.  After a couple tries I was successful and I brought my bucket full of ocean water back home. 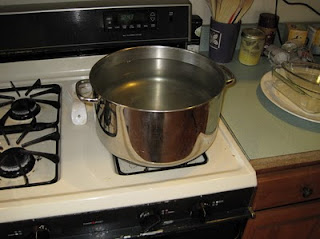 I filtered the water by straining it through a couple layers of t-shirts and put it into a big stainless steel pot and onto the stove top.  I'll make a long story short here - I boiled the water down (took all day long, finished at 11pm) and what I was left with was about a cup and a half of pure white sea salt.  Success!  That should last me quite a while.  And if I ever need more. . . piece of cake. 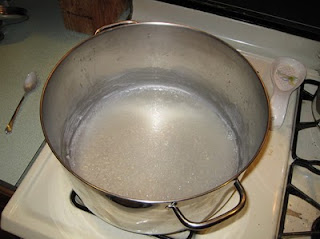 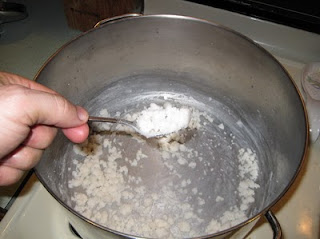 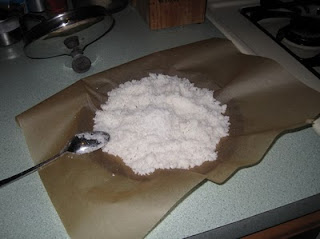 Ok - protein.  Last year, when the fishing wasn't so good, clams became my main meals in the beginning.  I had to drop Jamie off at gymnastics at 4:30 and low tide at my clamming spot was at about 2:30.  She has gymnastics for 2 hours and my spot is about 15 minutes away.  So although the tide has been rising (not good for clamming) I decided to check it out during the window of time that I had.
Ty and I drove to our Navesink River clam spot and when we got there it was already under water.  No good.  We decided to take a look at another area open for clamming on the Shrewsbury River that was only a 5 minute drive away.  The tide was about an hour behind our last spot but rising quickly.  We would only have about 30 minutes to find some clams.  I went into the water with my waders about knee deep and literally within 1 minute I found my first clam - a big, hard shell cherry-stone (or quahog).  Success! 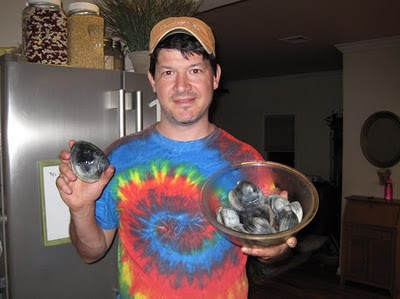 It seems that we found another good spot because I found about a dozen similar clams in about 20 minutes.  As we were preparing to leave to go pick up Jamie, I noticed several small holes in the sand at the waterline.  I dug into the sand in back of a hole and as I lifted, a spurt of water came shooting up.  Steamers!  Ty and I hit the clam jackpot.  We spent another five to ten minutes digging around all of these small holes and in that short period of time we found about two dozen steamers.  I was very excited and Ty had a blast (literally, he got blasted in the face with a shot of water from a clam).  These clams would be enough to hold me over until Thursday or Friday when I could find some time to go out and try for some fish. 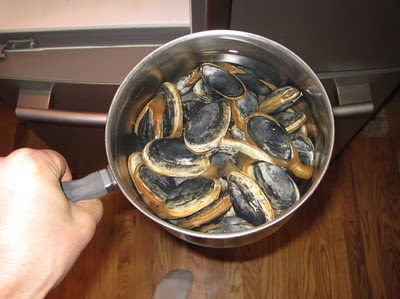 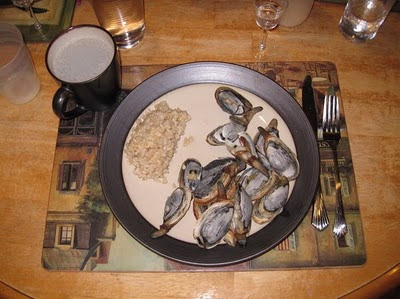 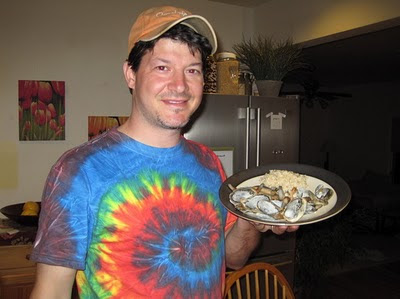