Whoops! I had a little brain fart today and I forgot to prepare myself some breakfast AND lunch before work.  It was an early start and I was checking e-mail or something and before I knew it I had to leave for work.  I had a bluefish fillet in the fridge but not cooked and I had some rice and beans but I didn't pack any up.  I also had leftover greens that I am still a bit repulsed by.  So needless to say, I had about an 8 hour stint from 5 am on without anything but water (and that damn 1 piece left of chocolate angel food cake staring at me - sitting in a ziplock bag on the counter all day at work).
No, I didn't eat it.  Interestingly I was not feeling the hunger at all.  I kind of like that.  My cravings were minimal and it wasn't like I was dying to get some food in me.

This made me realize a pretty important thing about eating.  I think the more that you eat, the hungrier you become.  You start to get used to eating larger amounts and more frequently - and then that becomes the norm.  And the times when you're not getting your feed bag on you feel really hungry.  So you eat more - and then more and then more.  And the converse is true as well - when you start to condition yourself to eat less and less, your body doesn't give you the same cues to want to eat.  In my case, the hunger and the feeling of needing food is not nearly as intense.  I could take it or leave it and today when I didn't have any in the whole first half of the day, I wasn't really bothered one bit.

I suppose that's how the starving people in the world eventually feel.  For them, food is not really a high priority because they don't have the access to it like we do.  Well, I'm not going to go off any more in that direction - that's a whole nother ball game.

When I got home I made a small meal from the bluefish, beans, rice and yes, even the dandelion greens.  I stuck it in the toaster oven on some tin foil and set it to broil.  Well, I go a little sidetracked and about 15 minutes later I could smell my meal burning up.  I caught it in time to still be edible but it was a little on the extra crispy side.  Oh well. 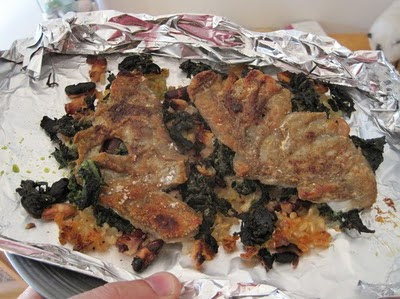 Later in the afternoon, Jamie got the idea in her head to make marshmallows.  We do that from time to time so we typically have all the ingredients lying around.  Corn syrup, gelatin, sugar and water is all you need.  So the two of us made a batch of marshmallows and it was VERY tempting to lick the bowl and the mixer with all that sticky gooey sugary whiteness.  I watched the kids do it - and that was enough for me.

I'm planning on fishing in the morning because the striped bass reports are insane again but the weather report is for wind wind and more wind.  It's supposed to be nice and warm but the wind will make the sea very difficult for me in my boat.  I'm going to brave it though - I expect a little sea sickness and misery but I'm hoping to get in, get some fish and get out.  So come back tomorrow and I'll tell you how it all went down.

"From mistakes we learn.  From successes - not so much.  Keep moving forward."
I'll give a buck to the first person who correctly identifies where this quote is from.
Posted by Doug Peterson at 11:26 PM