Tuesday morning. I don't have to get to work until 10am so I decided to go to the trout pond to see if I can catch something for lunch or dinner.  No joy.  There were a couple of big carp in the pond that I tried to snag with a treble hook but I was unsuccessful.  There were also a few geese in the pond that I was most certainly able to snag with a treble hook.  Alas, my conscience got the better of me and I did not try.  Maybe it was not my conscience. I think it was more about the fear of being seen or caught by someone else nearby.
Well, don't be surprised if you read a future post about a wonderful goose dinner I had - and no details will be revealed.  A bird would really be a nice meal right about now.

Lunch today involved a trip home to raid the garden and steam up some rice.  The Swiss chard is almost all gone from the garden - this is the most pleasant tasting of all the greens available.  We also have asparagus which are really tasty but Debbie has put some strict rules on them.  No asparagus harvesting because they need to seed for next year and the years to come.  (I sampled a couple small offshoots but I told her already so don't think about getting me in trouble) 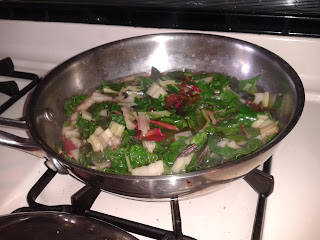 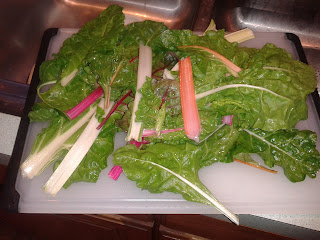 I was teased/tempted at work today as a box of DnD Munchkins showed up again - uninvited!  Yes - I was good this time.  But there's no crime in sticking my nose into the box and getting a good whiff of chocolate doughnut hole goodness (several times).

"To create more positive results in your life, replace if only with next time."
Posted by Doug Peterson at 6:48 PM