Day 8 - Big Bluefish, what a fluke

I got up this morning determined to catch some fish.  I decided to dunk the kayak in the river today because the boat is not available.  I was able to snag a couple bunker for bait but I didn't even get a single bite!  For about 3 hours I was out there paddling around and trying everything in my bag of tricks to muster a bite.  No luck.  Good exercise though - believe me, I got my work out today paddling against the wind.
So I'm coming back in feeling quite discouraged about the fishing situation and off in the distance I see something unusual on the surface of the water.
It almost looked like a snake swimming along the surface. As I paddled closer for a better look I saw that it was a huge bluefish swimming around in circles.  It must have been injured or something and I thought it was going to dive down as soon as it sensed me closing in.  But it didn't.  I grabbed my net and scooped it right in.  It started flapping and freaking out in the net and after looking closely at it, I still couldn't determine why it was acting like it was.  The only explanation I have is that perhaps the fish gods were looking down on me and threw me a bone.
This fish was huge - 33 inches long!  I cleaned it all up later in the day and still could not see any signs of trauma or illness that would have caused it to act the way it did.  Anyhow - lucky for me.  The first big fish for the SDC and just in time too.  I cut the meat into strips and plan to smoke it tomorrow after it has time to salt cure and fully dry. 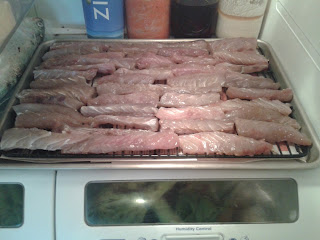 "I've found that luck is quite predictable. If you want more luck, take more chances. Be more active. Show up more often."
Posted by Doug Peterson at 10:44 AM