Day 6 is Saturday.  Finally a weekend to get some serious surviving done.  I need to get a stash of food for the weekend and the beginning of next week.  Only problem - rain, rain, rain - just about all day long.  Also, this is Easter weekend and we have plans for both days to do some traveling to visit family.  So if something is going to get done, it's going to have to get done in the rain.
Jamie wanted to go driving so I used this as an opportunity to take her back to the pond in Red Bank (which was supposed to be stocked yesterday) to see if the elusive trout would be cooperative today.  She used it as an opportunity to negotiate a trip to Jersey Mike's Subs for a turkey sub with the works!  This was my first turkey battle of the day.  By battle I mean battle of will power not to 'gobble' it all up.

I watched intently as she ate most of her sub but after she was full a nice piece of sandwich was just laying there for the longest time.  No - I didn't eat it!  We got to the pond and after about an hour of trying without a bite, in the rain, I called it quits.  As I got into the truck to go home a nice big juicy Canadian Goose strolled up along side the truck eating grass.  He was all alone.  Jamie tossed a piece of bread from her uneaten sandwich to the goose and it got even closer.  I had visions of a holiday goose all roasted up nice and crispy brown.  Didn't happen.  Not just yet.
No trout, running low on clams and heading to a holiday brunch of turkey with all the fixins of a Thanksgiving feast - on Easter.  When we got there the smell hit me almost immediately.  I brought with me a cup of rice, 3 clams, and some random greens from the backyard.  But when you've got a whole roasted turkey sitting right there on the counter there's no comparison. 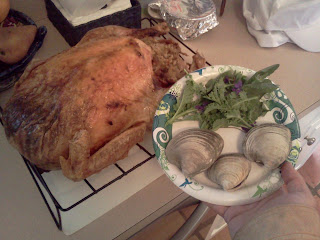 My only hope was that the meat was overly dry or there was some undercooked portion that was inedible.  Some kind of curse needed to be put on this bird.
Being the 'official turkey carver' of the family, it was suggested that I be given a pass on carving this one because of my diet.  However, if I wasn't going to get to eat any, I wanted to at least get my hands on it.  I set up the carving station and went to work.  Now I have carved many, many turkeys in my time but this particular one was so far beyond any other that I had to give it the recognition it deserves.  Every bit of this bird was juicy, soft and fall off the bone tender.  I originally thought that my unique situation may have tainted my opinion - and I'm sure anyone reading this would think the same - but I have to honestly say that it didn't.  It was just that good - and superbly cooked by my dad.  He described the process to everyone and it was clear that enough work and time went into the preparation to justify the quality of the results.  I didn't eat ANY (or lick my fingers) but there was so much left over that I did a little future preparation.  I grabbed the Foodsaver Plus and vacuum packed, sealed and froze two significant portions of turkey, mashed potatoes, stuffing, gravy, green beans, cranberry sauce, gravy, more turkey, did I mention gravy yet?  So I have a couple of nicely preserved Thanksgiving/Easter turkey dinners which will be on hold until the end of the challenge.
All in all, the clam meal that I prepared for myself was quite good in its own right.  The clams are not going to last forever though - so in the morning, it's back out there to find, forage and fish for my food.

“Discipline is the bridge between goals and accomplishment.”

Posted by Doug Peterson at 8:26 PM