I have a nice batch of striped bass pieces drying in the refrigerator today.  Last night I made some brine with water, salt and some maple syrup (almost all gone).  I soaked the fish overnight and this morning I laid it all out on a drying rack and put it in the fridge.  I am trying to get a pellicle to form which is a sticky glaze on the outside of the meat.  This will let the smoke adhere to it.

I also have that bluefish on ice so that will also go into the smoker/grill probably tomorrow.  The brine is just a highly concentrated salt water mixture with some syrup added for flavor and I think I can preserve it to be used over and over again.  So I kept that in the fridge in a ziplock and I'll use it again for the bluefish.  I won't use it too many times but no sense in wasting it if I don't have to.

After work today I'm going to start the smoker up which is basically my gas grill which is modified a bit.  I think I have some apple wood chips in the garage from last year.

For lunch today (and breakfast for that matter) I had a big bowl of sauteed dandelion greens and some beans.  Debbie really helped a lot with the greens but was careful to stay within the guidelines. 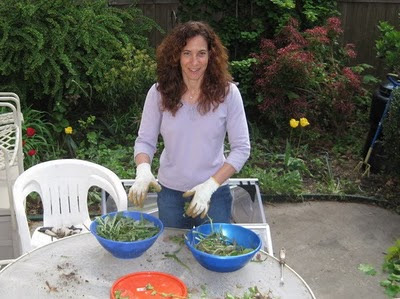 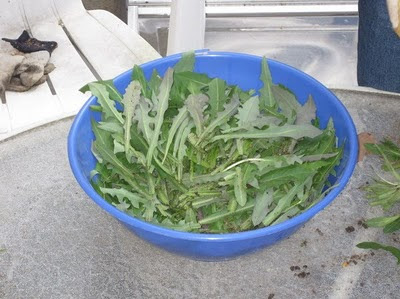 A big bowl full of dandelion greens
At first it tasted like a cross between broccoli rabe and spinach.  I didn't mind eating it but towards the end the flavor started to repulse me a little. 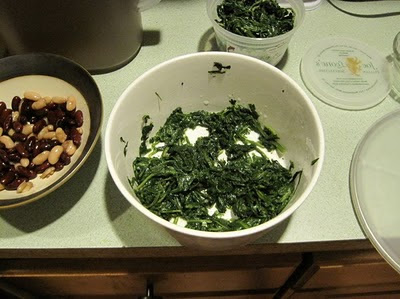 I actually couldn't finish the last bite and I felt like I did when I was a kid sneaking my unwanted food into a napkin to throw in the garbage.  I love most vegetables but I am fearful that I am going to get awfully tired of these dandelions and wild yard greens.  My fig tree plant has sprouted it's first cute little figlet.  At this rate I will have a handful of figs by Christmas.  Oh well.  I forced myself to eat a bunch of greens today and hopefully that will sustain me for a while. 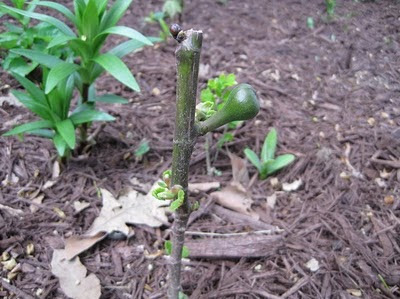 The figlet growing on a fig twig
I really, really, really want a chocolate bar.  And not your ordinary Hershey's bar.  I'm thinking of a big block of Valrhona chocolate from Whole Foods.  They are so thick that you can't easily open your mouth wide enough to bite a chunk off.  It's dark, rich 60-70% chocolate. . . Ok - gotta stop right there.  I'm daydreaming/typing again.  Sorry to bore you with my thoughts.

After work, I went right to 'work' on my smoker and bass strips.  I used my gas grill and made an aluminum foil pouch to hold the Apple wood chips.  I had some trouble getting it to really smoke though.  It seemed like it took forever to start the chips smoking and once they did, it wasn't a tremendous amount. 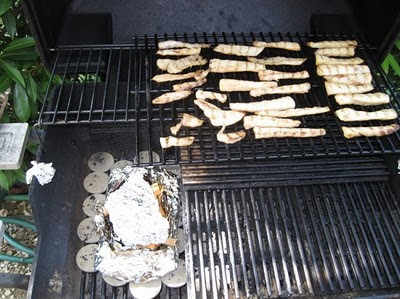 It still seemed to work pretty well though.  My fish strips turned out very good.  If I had one criticism it would be that the smoked bass was a little on the salty side.  (That sea salt really packs a punch)  So when I do the bluefish tomorrow I will rinse off the strips well before I lay them on the rack to dry.

We had a dinner and drinks get together to go to tonight and although everyone there knew I was doing the SDC it was uncomfortable for me to be in a social setting and not participate in the food and drink.  I must have had a gallon of water.  I was tempted to put the challenge aside for the night (especially for a beer!) but I think I did the right thing and stayed strong.  It's actually helpful when everyone knows I'm doing it because they become more supportive.  And it's always an interesting topic of conversation - that's for certain.

Two people who have thriving gardens, even this early in the season, invited me over to pick some greens.  I think I may take them up on their offers.  I don't think that would contradict my rule system - although it's a slight bending of the rules.  I was also thinking about the fish that I gave to my sushi place.  If I catch fish and then sell or trade them for other food or goods, that is surviving as well.  I should be able to use anything that I find, forage, or fish to trade like currency for other things - as long as the other things aren't like a Big Mac and fries.  But I think if I trade a striped bass for a fillet of salmon or yellowtail - that would be fine.  It would be nice just to have a little more variety and diversity in my diet.  If anyone has any comments about this or the veggie garden raid - please let me know.  Man,  I could really go for a Guiness right about now!

I think I'll start to post pictures from time to time of the comfort foods I am craving.  I'm glad I didn't ask if they had any Guiness in the fridge because if they said yes then I may have jumped ship.


"The difficulties and struggles of today are the price we pay for the successes of tomorrow."
Posted by Doug Peterson at 1:08 PM