Today I was dreading the fact that I really didn't have much to do and the weather report was once again forecasting rain and yuck.  However, I got through it fairly easily by finding some stuff to do around the house that I had been procrastinating.  In the middle of the day there was about a 2 hour break in the rain and drear so I used that opportunity to hop on the kayak for a little exercise and I was pleasantly surprised at the result.

I trolled 2 rods out the side of the kayak using plastic storm shad lures and started paddling non-stop.  To start, I paddled right into the wind and almost immediately got a bite on one of my rods.  It was a big fish!  Then as quickly as it was there, it was gone - my line had been cut.  Bluefish.  It took me a while to get situated again but soon enough I was trolling again.  This time I toughened up my tackle by adding 80 pound test to one rod and a wire leader to the other. 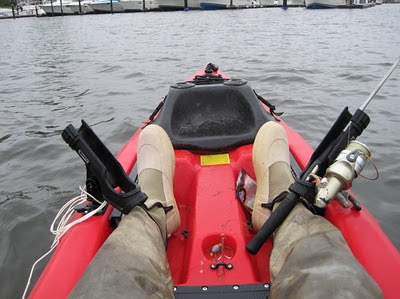 It took some time but eventually I got another strike.  This time it was on!  My tactic of beefing up my tackle seemed to work perfectly and after a good fight with a lot of jumps, I landed a nice sized bluefish.  It got all tangled in my other line and I almost booted it while trying to get it in the net - but it all worked out in the end.
I was excited to have these 2 opportunities because I thought today was going to be a total wash.  I immediately started the troll up again but after about an hour of paddling - no more bites.  I wanted one more fish so badly because I could have smoked one and had the other as regular meals.  I'm not sure what I'll do with this one but the smoker worked so well last time I'm sure I will do some that way.  I started getting rained on quite a bit so I packed it in and went home. 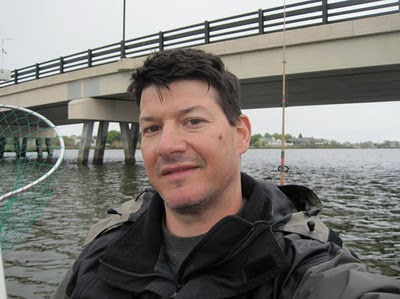 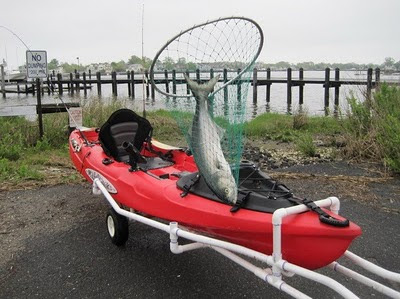 My home-made kayak trailer for my bicycle works great!
I put the fish in a bag and stuck the whole thing in the refrigerator (sorry Deb) so that it will be ready to fillet tomorrow after work.

Monday is one of my nights to make dinner.  I decided to make a veggie stir fry with chicken and noodles.  Debbie bought some broccoli and bok choy and I cooked up a really wonderful SMELLING dinner.  The fresh garlic and ginger and soy sauce have such an aroma and it's always difficult to cook such a meal without eating any.  Everyone else seemed to enjoy it though - so that game me some satisfaction.
For myself I made a fish burger.  Sounds great huh?  Actually - it was quite delicious.  I sauteed up some striped bass and after it cooled I flaked apart the meat and mixed it with a handful of rice.  I seasoned with salt and pepper and formed it into a burger-like patty.  I browned it in a frying pan with some melted butter and all I was missing was the bun.   I think I could have convinced myself that it was actually a burger I was eating - or at least a crab cake.  It held together quite well just using the rice and fish. 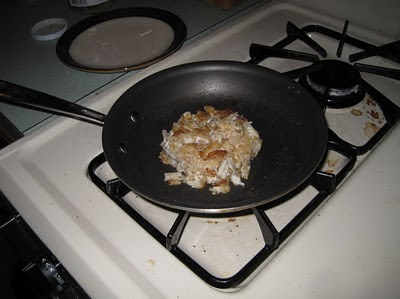 Fish Burger
I regret having Old Bay as one of my weekly rewards from last week because I didn't use it - didn't need it.  Salt from the sea and pepper is really all I need for spices.  The butter was a blessing.  Can you tell by how many times I've mentioned cooking with it?  I really have to start rationing the butter because I've gone through one quarter of my supply already in one week having it.  At that rate I'll be out of butter before the end of week 5 - so I have to be smart about that.  I am going to think about the Old Bay thing.  Since I haven't used it, maybe I'll substitute it for something else that I could use.  After all - they are my rules and I can change them if I want to.

I almost forgot about my reward for completing week two - flour, breadcrumbs and vegetable oil.  Hmmm, can you make chocolate chip cookies with that?  Ha!  Those things should be helpful.  I can fry some clams this week if I get anymore.  Clam season ends April 30 so if I want to have a supply I better get out soon.  I think Thursday the 29th should be a good low tide after work so I'll make sure to go then.

So I got through this day by keeping busy, housework, fishing, kayaking, a lot of cooking, fixing computers, setting up video games for the kids, etc.  Long day at work tomorrow.  Back to beans and rice for lunch.