What  can I say about Day 6?  It's Saturday.  Ty had his first baseball game at 8:30 in the morning and the weather was threatening rain but never did happen.  It was a cold and dreary morning and the ocean and river were basically out of the question for fishing.  I still had a nice supply of clams but that's not going to sustain me for much longer.  Plus I'm getting sick of them.
I had a little bowl of beans for breakfast and I picked a few more edibles from the lawn as well.  I watched 'Survivorman' on tv yesterday and he was showing how grass can be used for nutrition.  Instead of eating it, he just picked a wad of grass and chewed it up and sucked out the juices (almost like chewing tobacco).  He said the chlorophyll was great for you.  So I did that a little in my yard.  It wasn't bad - until it came time to spit it out.  I had tiny bits of grass stuck between my teeth and it was a little annoying.  I suppose it's worth it for the nutritious value though.
I found a nice cluster of freshly sprouting dandelions in the side yard.  They are most tender and least bitter at this stage.  That was my mid-afternoon snack - sprinkled with a little salt.

Since the saltwater fishing was out, I decided to give the trout another try.  Ty wanted to come this time so we headed over to a little pond about 10 minutes away.  I chopped up some clam pieces to use for bait.  After a while without a bite we switched spots to see if there were any sunfish or other panfish around.  They are usually pretty easy to catch.  I cast out to a promising spot and sure enough I got a bite.  I reeled it in and it was a small catfish.  I don't particularly like catfish but beggars can't be choosers.  I didn't have a bucket or a bag to put it in so I just put it in my jacket pocket.  Ty was pretty excited about that.  We continued this way for a while and caught a few sunfish - tiny.  Into the pocket they all went.  I felt a little ridiculous keeping these tiny fish but that's what surviving is all about. 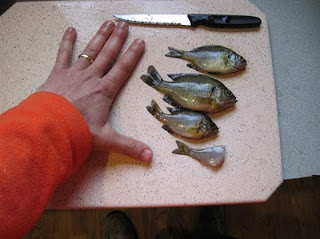 When we got home I dumped out my pocket and all the fish were dead except for the little catfish.  They are tough little buggers.  The kids were amazed that it had survived for about an hour in my pocket no worse for where.  They begged me not to kill it because they wanted it now for a pet.  I caved in (despite my hunger) and we made a little fish bowl setup for this catfish who was promptly named, "Mr. Fredrickson" by Ty.  The strange name stuck and the kids have a new pet. 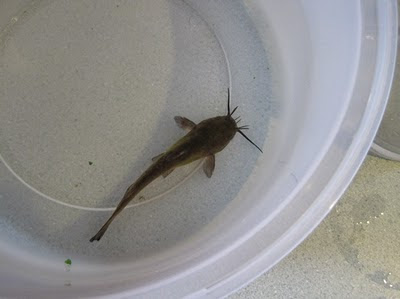 Mr Fredrickson
They sunfish were scaled and cleaned and sauteed up with a little salt (man I need some butter or oil).  I mixed in some clam pieces and some beans and clam broth.  It wasn't bad.  If I was REALLY hungry I suppose I would have picked at the bones a little more but I just didn't have the stomach for it.  You need butter to really crisp up the fins so that didn't happen either.  I was just thankful to have  a little fish added to my diet.  I think I'll try another lake tomorrow morning.  A nice trout would go a long way. 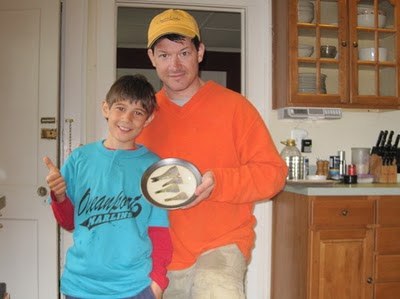 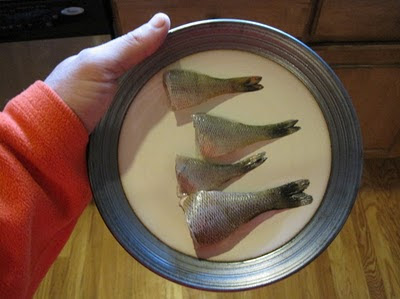 If the weather looks better tomorrow I may go take a look at the ocean or that other lake.  What else can I do?  Maybe I need to start expanding my search for food.  I've focused so much on fish because last year it was quite plentiful but this year I'm having problems.  Debbie was reading about some other wild edibles that grow in the salt marsh so maybe I'll give that a try tomorrow.


"To get what we've never had before, we must do what we have never done before."
Posted by Doug Peterson at 9:57 AM