I don't have a whole lot to do today.  It's raining outside so I'm stuck inside and my kids have a recent fascination with the TV Food Network.  Granted it's better than Nickelodeon or goofy cartoons but the food, the food, the FOOD!  It all looks sooooooo good.  Ace of Cakes, Good Eats, The Best Thing I Ever Ate!  Come on!  All I want is something sweet and savory and my meal plan just aint cutting it.
I only have about 2 tablespoons of maple syrup left and that's the only sweet thing I have.  The problem is I can't make any more of that because the sap is not running any more.  I even put a little syrup on my rice this morning for breakfast.

Speaking of breakfast, I busted open the last of the clams - they were still perfectly fine after spending about a week in the fridge.  I cleaned them and chopped them up and sauteed them with some butter and then added some rice and a crumbled up piece of smoked bluefish.  All together it was actually quite good.  Not chocolate cake good, but quite good. 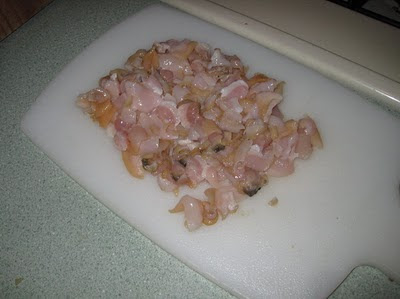 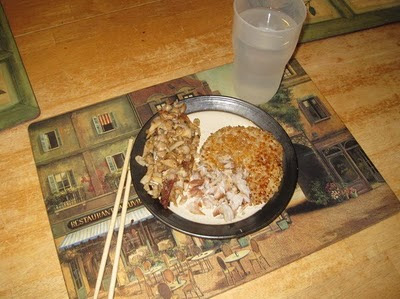 Throughout the day I managed to gobble up ALL of my reserve smoked bluefish - just because it was there.  It's no cookie but it's the closest thing to sweet that I had.  I'm really jonesing for some desserty foods.  Well, it's not over yet - maybe I can figure something out.  Who says you can't have chocolate cake on the SDC?  Maybe not chocolate cake exactly - but something. . . just gotta think.

I did some thinking and some research and came up with bubkis!  The only sweets from nature that I could come up with were sugar cane - which, to my knowledge, doesn't grow around here, or honey.  Honey is a good idea - if I want to risk being stung to death by bees!  I don't have any idea where to find a beehive or even if there are bees making honey at this time of year?  I suppose that once the flowers start blooming the bees start making.  Well, I'm not that desperate yet.  But I will certainly bee keeping my eyes open.  We'll see.

For dinner I had defrosted 2 rib sections from one of the striped bass I caught earlier in the week.  I had my mind set on grilling them but after I lit the grill I had a disaster!  I looked out the window and the front of my grill was on fire!  Ty thought it was the coolest thing.  I quickly shut off the gas valve at the house and the fire went out.  I had caught it in time before it caused any major damage but my gas line is melted and I won't be able to use the gas grill until I fix it.
I moved the fish ribs to the toaster oven and set it to broil.  It wasn't quite the same as grilled, but it turned out fine.  I ate one and I picked all the meat off the other for tomorrow's breakfast or lunch.  I can't believe that most people usually throw away this part of the fish.  There's so much meat in this area and it's very good quality meat at that.  It just takes some extra care to clean it.


"Whatever the mind can believe and conceive, it can achieve."
Posted by Doug Peterson at 2:34 PM