Here we are at the halfway point - Day 20 - and still going strong!  In a couple days I will have completed my third week and the reward for week three is some fruit (a pineapple, orange and lemon).  Debbie picked them up at Whole Foods today so that the pineapple would be ripe (hopefully) by Monday.  This fruit is going to taste really good - especially the sweetness of the pineapple.  I skipped my last weekly challenge reward because I am going to trade it for an upcoming special occasion reward.
Carly's communion is next Saturday and Mother's Day is Sunday.  Gary is having a party afterward at the Trump Country Club so there's no way I want to go there and not eat.  Looking forward to that.

It feels good to be halfway done but there's a lot still ahead and it's not going to be easy.  It has been most difficult get greens to eat and I think I am lacking in that department - nutrition wise.  Earlier I mentioned that a friend has a garden that she said I could raid to get some spinach and some other more common greens.  I haven't done that yet but I'm considering it.  It kind of compromises my rule system a bit so I'm hesitant.  Speaking of rules, going through this for the second time has made me rethink some of my rules and rewards.  I will have to remember for next time to put some type of green veggie reward in.  I could leave out the week 2 reward of flour, breadcrumbs and oil.  Although last time I fried up some fish - this time I don't really have the desire to do that.  And nutritionally speaking, those items are not very helpful anyway.  The fruit is good but won't last very long.  I like the idea of a week 2 BIG chocolate bar reward.  But maybe that's just my sweet tooth talking.

Debbie had a good idea about a reward.  For those of you who actually watch the show, every once in a while they have a food auction.  The players get to bid on certain food items and sometimes they are good but sometimes they are 'mystery' items and you don't know what you're getting until it is unveiled.  Well, Debbie thought that it would be fun to make up three different dished or food rewards, cover them and allow me to choose one.  On the show, sometimes there are duds under the covers - like "You just bought a bowl of octopus brains for $200" so she was going to try to mimic this model.  I don't know? - It's and idea we were toying with.
Blog readers - help us out!  If you want to suggest some type of food reward item or funny zinger item to be placed under the mystery covers - send an email to Debbie describing what it is.  Her email is: afsdfas

Today I had a lot of striped bass to fillet so I got my station ready and went to work out in the yard.  It takes time to clean these fish properly and the scene always attracts a group of kids from down the street.  They love seeing all the guts and the head and inside the stomach to see what the fish had been eating.  I give them rubber gloves so they can touch it all without getting any on their hands. 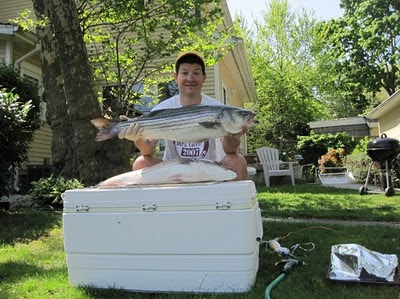 Today, the Buckmans came over and we were all fascinated with fish brains and eyeballs and all the little fish that were partially eaten.  Sounds gross but it's a great learning experience - especially for them to feel it all.  They had so many questions about different organs and parts - things I didn't know.  We're going to have to look some things up someday.
The eyeballs are particularly popular with the kids.  They ask me to pop them out and cut them open and when I do I have them all touch it and feel what it's really like.  Then when we cut it open (after all the goo explodes out and a group "ewww" is echoed by all) we found the hard, clear, marble-like lens that is inside each eyeball.  It's actually pretty neat if you've never seen that before.


Except for Ty, all the other kids are grossed out by eating fish!  I was shocked.  I'm sure it's because they have never had it as fresh as it is here and as tasty as I make it.  So after cleaning the fillets I took a piece and sauteed it up in some butter with a little salt and pepper.  Of course I had to bribe most of them to try it but once they did - they all liked it.  I wasn't forcing it on anyone but it was so good and fresh and tasty that I promised a few of them that I would take them for a ride around the block in the kayak if they just gave it a try.  That seemed to work.  After all, I'm just trying to broaden their horizons a bit.  How can you be SO against trying a piece of fish if you've never had it before? 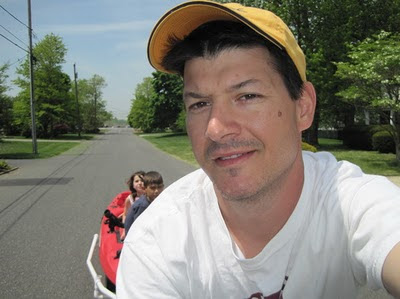 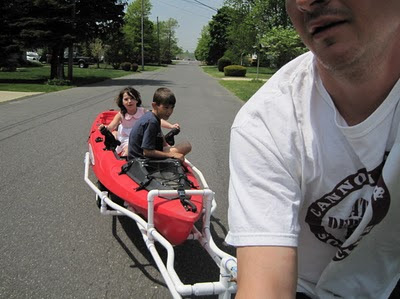 This was fun for a while but they wanted to keep going faster and going around the block over and over.  Although I rationalized that this was good exercise for me (and it was) - enough was enough.  It's tough enough riding my bike towing the kayak but add the weight of 3 kids (there's another one there that you just can't see in the photo) and it's quite difficult.

Ok - back to Survivor. . .
For lunch today I fixed myself a nice little striped bass sashimi plate.  I was very pleasantly surprised at how good it was.  I really take care of my fish well and this is a testament to that fact.  It was clean and fresh and quite delicious.  Debbie's mom, Nancy came over for a quick visit and her timing was perfect for sashimi so I sliced up a dish for her to have as well.  Honestly, it was a lot better than I thought it would be and although it's a somewhat bland, white fish - it had a nice flavor of its own.  We all enjoyed it - except Jamie who is strictly a tuna and salmon sashimi eater (for now). 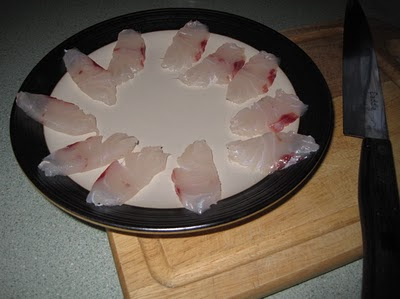 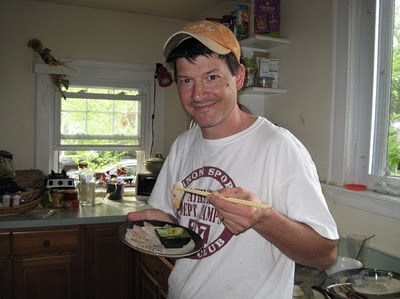 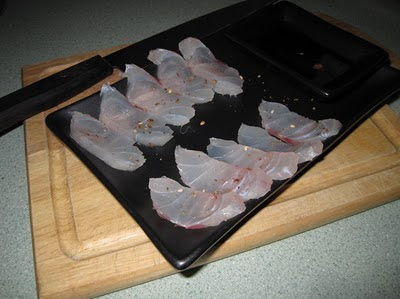 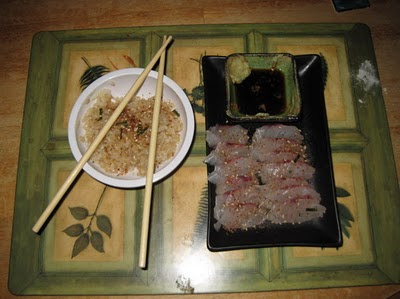 Later in the day, Ty and I were still toying with the rabbit/goose idea.  I found an old wrist rocket that I have had for years and we had some target practice in the backyard with a cardboard box.  He's the perfect age to get very excited about such a weapon.  And yes, I am being as careful as possible and supervising at all times.  After all, he may shoot his eye out. 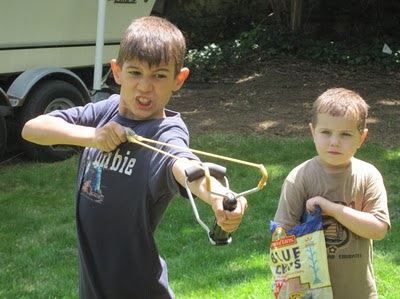 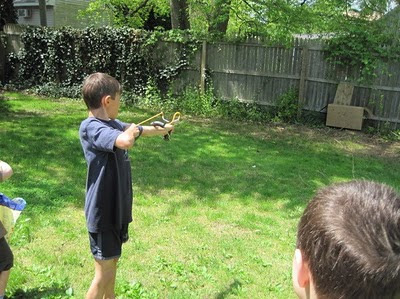 Of course this attracted the attention of young Buckman boys who were all to eager to have a turn.  We had a lot of fun with this but ultimately I don't know if I'm at that stage of Survivor just yet.  Debbie is quite against it.  We also saw 2 geese that would have been easy pickins down by the park today.  I think geese always are in pairs with their mate so I wouldn't want to break up a pair - but if the opportunity comes up and I see a lone goose who has lost it's life partner - maybe I'll think about it some more. 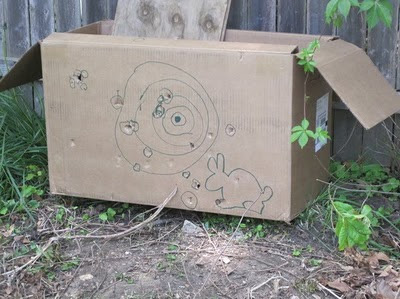 Marbles make great ammunition for the wrist rocket.
More sashimi for dinner - and tomorrow I have to preserve all of my clean bass fillets in vacuum freezer bags for the future.  I also set aside a bunch of strips and soaked them in some brine overnight so that I can get the smoker going again tomorrow.
Tomorrow is the NJ Shore Marathon and it is literally going past my front yard!  We are basically trapped all day at the house because all the streets are being blocked off for the event.  I'm sure it will be interesting though.  I'll post some photos tomorrow.
"A person's manners are a mirror through which he shows his true portrait."
Posted by Doug Peterson at 7:27 AM