The weekend weather outlook is good for fishing and outdoors.  Finally.  I worked most of the day and was done around 2 so I decided to check out the Monmouth Beach Surf Cam online.  I use this frequently to see how calm or rough the ocean is.  The wind was minimal and the waves were small so I started making plans to do some fishing.  Next I checked the tide chart to see what I would be dealing with.  It was dead low tide.  Not good for surf fishing.

I had to switch gears and come up with another idea.  Debbie had to leave the house at 5 to go to the movies with her mom so my window of opportunity was slowly closing.  The answer - an hour of spearfishing.  I got all of my gear ready and was in the truck by 3:00 with specific instructions to be back by 4:45.  I was in the water by 3:15.  The best part about spearfishing here is that I can be in the water in 15 minutes.  To get to the same location by boat would take about 2 and a half hours and cost about $40 in gas (in the best conditions).

My first dive was in about 13 feet of water (about 100 yards off shore) and visibility was terrible.  My spear tip actually hit the bottom before I could see the bottom.  Yuck!  Not a good sign.  I had to go deeper to see if I could find some clear water.  I got out to about 18 feet on my next couple of dives and just by chance I found a great location.  I found myself on a large area of structure - rocks covered with muscle beds, star fish, sting rays, horseshoe crabs, etc.  It's really amazing how life underwater flocks to any area with structure.  I grabbed some rocks to hold myself to the bottom and laid very still.  The stripers didn't take long to show up.

My breath hold is still not up to par since this is only the third time diving in 5 years.  The chill in the water (48 degrees - Brrr!) also makes it difficult to stay under for very long.  My best bottom time for this entire trip was only 48 seconds.  But most of the time it was somewhere between 25 and 40 seconds.  When the stripers started showing up I was trying to be very selective.  I didn't want to shoot any questionable fish so I was determined to let any small ones swim by and wait for the big ones to show.  However, ALL of the fish I saw were in the 'keeper' size range (about 30 inches give or take 2 inches).  It was difficult to watch these fish go by but I really wanted to go for a personal best.  Currently my biggest striper is 35 pounds and that was a long time ago.  There have been recent reports of 40+ pounders nearby so I knew there was a chance.

I was able to position myself to continually dive back to this structure area even though it was not visible from the surface.  I started seeing some large blackfish and considered taking one of them home for supper.  I passed on them after a particularly large school of stripers came into view.  Or I should say a school of particularly large stripers came into view.  I held my breath and watched some 20 pounders swim past.  Just as I was about to surface, a really big one came swimming past me to the right.  Significantly larger than the surrounding fish.  Time to take my first shot.  I didn't have the best angle on this one but I was running low on air and needed to take the shot soon.  I reached out, pulled the trigger and could clearly see my spear shoot high - just over the fishes head.  Damn!  On my way back to the surface I was livid.  I belted out a bunch of underwater profanities and I was hoping that my missed shot hadn't scared the whole school away.  Sometimes this happens.  The vibrations of the shot going off can spook all the fish in the area and sometimes you don't see another one in the area for a long time.

It took me a while to reload and just as I was finished I looked down and saw a bunch of nice sized fish swimming right below me.  I considered taking a shot from above but that is not a high percentage shot.  I dove down and spooked a bunch of fish but gradually settled to the bottom and they curiously came back around.  Not as big as my missed fish (of course) but I saw a few nice ones and picked one out to shoot.  It wasn't the best shot but it did the job.  I usually try to shoot for the stoning shot or a head shot but this one went through the body and will affect some of the meat.  At least the fish were still there.

I was getting cold and I only had about 3 or 4 more dives in me so after stringing my fish up on my float I went back down with the mindset of not shooting again unless I saw something REALLY big.  I lost my bottom structure because I drifted a long distance while I was at the surface.  I also had a pretty long swim back to the beach and I was quite cold.  But the fish were still there and you never leave fish - right?  I took a couple more dives and watched a lot of 20 pound plus fish go by.  But nothing that was standing out above the rest.  On my way back in I managed to shoot one more fish that was in the same class as the first one.  Then it was time to start swimming. 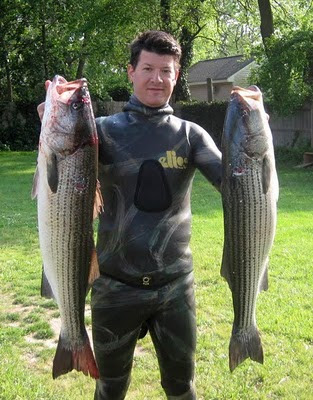 Both fish were 37 inches long.  Both shots were far from perfect - but got the job done.  It's nice to know that there's still a plethora of big bass right off shore and they are getting bigger.  I'll get my personal best soon I'm sure.  Just gotta keep on truckin.


"It takes courage to break through barriers and to go places you've never been before."
Posted by Doug Peterson at 12:55 AM