Ok - so I ruined the surprise with the title.  And YES - tonight was a celebration of the first haul of Blue Crabs this season!  It couldn't have come at a better time.  Variety is the spice of life and my spice tonight was blue crab.  It was so good and so sweet and I added a little drawn butter to kick it up to the next level.  With fresh crabs you don't even need that because they are so tasty by themselves - Mmmm, so good. Day 39 was awesome!  But it didn't start out that way. . . 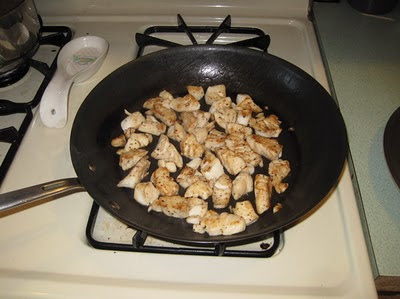 Some bass for breakfast
I took a quick drive to the beach in the morning to check out the surf.  It was fairly calm but the tide was too low to fish very effectively.  However, on my way there I crossed over the Monmouth Blvd Bridge and I thought I noticed some bunker splashing way out in the distance.  I thought to myself that today may be a better day in the river than in the ocean.

After the ocean was a bust, I trailered up the boat and dunked it into the river.  I headed over to Branchport Creek to try to locate the schools of bunker.  For those of you unfamiliar, bunker are baitfish that spawn this time of year in the upper branches of these saltwater rivers.  They form massive schools and are a favorite food to many predatory species in the area.  They also make great crab bait because they are very oily fish and have a strong scent which attracts everything to them.

It didn't take long and before I knew it I was smack dab in the middle of bunkerville.  I used this opportunity to try out my new cast net.  This is a large round net that you toss out like a giant Frisbee.  It has weights all around the circumference and as the weights sink, anything that was underneath the net when it was tossed will get scooped up.  It takes a lot of practice but I got the hang of it last year after watching some instructional Youtube videos.  The new net is HUGE though - much more difficult to toss, and a whole lot heavier.  I practiced throwing it for a while in the backyard last week and before long I was doing quite well.

The trick today was finding the bunker and then motoring up to them before they disappeared.  It's tough to do when you're alone.  I had some success.  On my first few casts I picked up one or two hear and there.  Then I had a great toss on a close up school and hit paydirt.  It's possible to get a hundred of these fish in one toss if you are good.  In this toss I probably picked up 20 or so.  Not bad at all.  I put all of my bunker into my homemade livewell and kept at it for about an hour.  In total I must have net about 40 fish.  I tried to keep them alive as long as possible but when the tank starts to get over crowded there isn't enough oxygen to go around.

After getting as much bait as I could, I anchored the boat in the middle of the bay and thought I would take a chance at some crabbing.  It is WAY early in the season for big crabs but with everything else that has been going on, you never know.  I cut up a few bunker, attached them to three drop-lines and threw them over the side.  While I was waiting for crabs I decided to send a live bunker out on a hook to see if anything would take it.

It wasn't long before the action started happening.  I started pulling up my droplines and then looked over at my fishing pole which was bent over with line screaming off the reel.  I was hooked up with a very large bluefish.  I wasn't using a wire leader so I was amazed that I was able to land this fish without breaking my line.  It was huge (by bluefish standards) - about 12 pounds I would guess.  I kept him for the smoker.

The action continued with the bluefish biting every few minutes and pulling up blue crabs in between.  I was all by myself but was going non stop for a couple hours.  A lot of fun.  I only had one throwback crab.  All the rest were really big - already.  This is a REALLY good sign for things to come.  Lots of crabs, lots of bait, lots of fish around.  I only kept the one big bluefish and tossed back about 4 others.  I ended the afternoon with 15 nice crabs and one bluefish.  And to think - I was only going out there to see if I could get some bunker for bait for tomorrow's fishing trip. 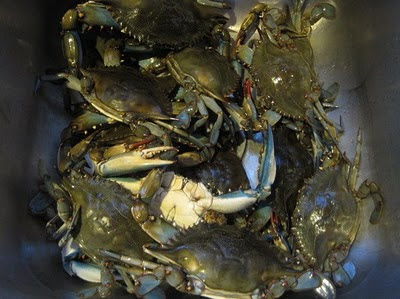 The crabs have arrived - time to get out the trotline
It just goes to show that you have to get out there and do stuff - you just never know what's going to happen, but if you don't ever try then it is certain that nothing will happen.  I was a little dejected after seeing the beach in the morning but wound up having about four hours of excitement and fun by just getting outside and trying something new today.  That's what the Survivor Diet Challenge is all about my friends! 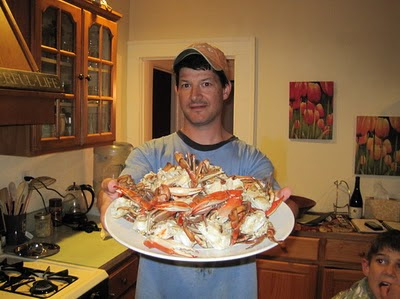