I think I'm starting to grow gills and fins.  Fish fish fish fish fish.  That's all I eat.  And some rice and an occasional handful of beans.  It's time to go picking some dandelion greens again too.  I am having trouble finding the violet greens, which I like MUCH better, because I've eaten all of the flowers in the yard and I can't find the greens very easily without the flowers.  Funny huh.
Those leaves are very much like salad and don't leave a bitter or unpleasant aftertaste like some of the dandelions.  I'm going to need Debbie's help to find some more.

I finished making that fish stock with the bones, head and fins of the most recent bass that I caught.  After straining it into a bowl and refrigerating it overnight, it turned into a gel.  I suppose that is a result of the marrow and connective tissue that broke down and melted into the stock.  And as it cooled, it gelled up like a demi-glace.  Such an interesting consistency - there must be something interesting that I can use that for.  Time for a little internet food research.  Here's what it looks like:


The fish jerky was finished when I woke up in the morning after spending the night in the dehydrator.  I made the same mistake again of not rinsing off the brine before dehydrating.  I did that with my first batch of smoked fish and all of it came out too salty.  Same thing.  Now I have a whole bag full of inedible salty fish jerky.  Stupid!  I eat a piece every once in a while but can't really eat too much of it.  Especially while trying to get my blood pressure down.  I'm almost out of salt so I probably have to make another batch before the challenge is over.

For lunch I grilled up some bass rib sections.  I pretended that I made 2 racks of baby back ribs.  I gave them a generous basting of butter at the end of cooking and they actually turned out very good.  I must sound like a broken record but if most people who catch striped bass took half the effort that I take in tending to the fish after they are caught, they would come to really enjoy many parts that normally get tossed away.  The rib sections contain the belly meat and anyone who knows anything about fish parts should know that the fish belly contains the most fat.  Just like fat in a hamburger, the fat in fish breaks down when cooking and adds an incredible amount of flavor to the meat.  Bass isn't a very fatty fish (like salmon) but what little there is can be found in this belly meat around the ribs.  Ok enough on fish anatomy. 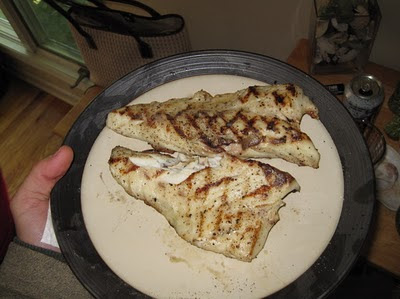 I found a way to make very good use of my 'too salty jerky' tonight at dinner.  I had a beautiful piece of bass to slice up for sashimi tonight and after I laid it all out on the dish I used my microplaner and I grated the jerky over the top of the slices.  This was a fantastic idea I must admit.  I actually created a great little seasoning to spice up the taste of the bass sashimi.  It reminds me of a previously posted quote, "From mistakes, we learn.  From successes, not so much.  Keep moving forward."  (That was from the movie Meet the Robinsons by the way - nobody won that prize!)
The jerky grated very fine and looked like sawdust over the top.  It added just a hint of concentrated fishy saltiness to the sashimi.  If anyone knows what "bonito flakes" are, this was the striped bass equivalent.  I'll certainly continue to do this for salty flavoring for many other dishes.  I grated a bunch over my rice and it added a really nice flavor.  To think I almost threw the whole batch out after tasting it in the morning.  Eating it whole was almost inedible but grated it works! 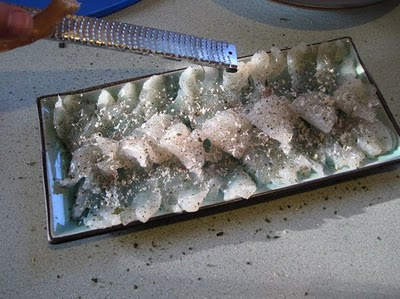 I had to cook for the other guys tonight and I made grilled honey mustard chicken with grilled asparagus and artichokes.  It looked and smelled soooo good.  Uhg.  The toughest times are when I have to cook, prepare and serve real food to the rest of the family. 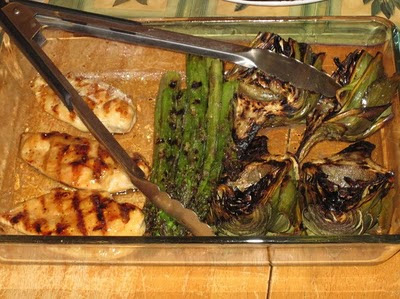 I also gave Debbie a box of chocolate covered marshmallows on top of graham crackers as part of her Mother's Day gift.  I bought it online from a place that claimed to have the worlds best chocolate and marshmallows.  Debbie and the kids have been enjoying them for days now.  I wish they would just finish them up already.

I took a few more fish pieces out of the freezer in preparation of the upcoming long days at work. I have to be smarter and more prepared in the greens department though.  Oh, I almost forgot - it's Monday and the end of week #4.  My week 4 reward is a big juicy hamburger with all the fixings!  Oh I'm going to enjoy this.  Ty wants to go to Five Guys but I think I'm going to go for a more upscale burger.  Maybe at a steak house or something similar.   More research is needed.  I don't want to waste this reward on a fast food joint.  I remember a burger in San Fransisco that was topped with a slice of foie gras.  Now where could I find that around here. . .  Maybe I'll bring my jerky and grate some on my burger.  Ha.


"Anyone who stops learning is old - whether you're 20 or 80.  Anyone who keeps learning keeps young."
Posted by Doug Peterson at 8:04 PM