Day 11 - Blues in the backyard

This is a long fishing report so if you're not interested then don't bother.
I had to add another post to Day 11 because of this very exciting event (if you're a fisherman).  After work I took Jamie out in the kayak at the end of my street.  There is access to the Branchport Creek of the Shrewsbury River.  I rigged a bicycle-kayak trailer so I can get some exercise when I go kayak fishing.  I'll post pictures of that later.  Anyway, we put the kayak in basically in my backyard and as we start paddling out we saw the splashes of many fish all around.
I could tell these were bunker schools by the sounds they were making when they were breaking water.  This is a little early in the season for bunker but it has been early for everything so far.  They were EVERYWHERE!  I had 2 rods with me and luckily I brought some treble hooks for snagging.

Jamie was casting shad jigs while I was rigging the other rod with a treble.  She's a great caster for a 7 year old girl.  However, at one point the reel seat cam loose and as she went to cast I glanced over and the reel went flying into the river!  She was holding the rod and the bail was still open on the reel which was at the bottom of the river.  I've never seen that happen in my life.  In order to retrieve this reel we had to paddle FAR away as ALL the line came off the reel.  I knew I tied a knot on the spool.  When we got to the end I had to hand pull up all of the line dragging the seaweed covered reel to the kayak.  Picture me and Jamie sitting in the kayak, covered with 6 lb test fishing line, trying desperately to feed all the line into the water so that it doesn't get tangled up.  Eventually it got tangled, I did retrieve the reel, cut the tangled mess, retied and salvaged as much line as I could.  Whoooh!  Then after all that Jamie looks at me and says, "I want to go home - I'm cold."
Ok - so you may be wondering why I went into so much detail there.  Well, the whole time this reel/line fiasco thing is going on, there are bunker splashing ALL AROUND ME!  And every couple minutes there was a major attack from the big predator fish.  I did everything I could to contain myself and help to fix this reel/real problem.
Not that I don't love when my kids come fishing with me, but I was very happy to paddle back to drop Jamie off so that I could get back to serious business!  I re-rigged both rods for live bait fishing and we were ready.  The tide was the highest I've ever seen it in this area.  It was about 5:00 pm and I stayed out there until 9:00.  It was non-stop as these massive schools of bunker attracted the big bluefish.  There may have been bass there too but I only saw signs of bluefish.

I had a fantastic time.  I had multiple tackle foul-ups but that only adds to the excitement when you're in the fish like that.  I had a very lightweight trout rod with 6 pound test mono, and I had a medium action spinning rod loaded with 50 lb braid.  I figured that would be my main rod but I rigged both up anyway.  I didn't use the weighted treble because I didn't have very good leverage from the kayak for snagging fish and my rods weren't heavy enough.  Initially I used an 80lb leader tied straight to the big treble hook.  After snagging a bunker I repositioned the treble and just let him swim back out.  I did manage to snag with the lightweight rod too - there were so many bunker it was crazy. At times I had two live line rods out with a swimming bunker on each.  Can you imagine any tackle mishaps at this point - from a kayak.

Both baits got attacked at the same time.  I grabbed the larger rod and let him take it for a few seconds.  When I went to set the hook, SNAP, my rod broke in half.  Not only did the rod break but the line broke as well.  So I lost my rod top, my rig and my fish!  The bottom of the rod had one guide left.  I switched back to the other rod which was bent over and started to reel it in.  I couldn't set the hook because of the light rod and as I brought it near, the fish came loose.  I reeled it up and the 80 pound mono was cut clean through.  Treble hook #2 gone.  2 left.  Now I had a half-rod and a lightweight trout rod trying to catch fish that were probably over 10 pounds, using bait that were alive and over 10 inches each.

I scrambled through my tackle pouch and luckily found a 6 inch wire leader!  Yeah - that was going to be a big help.  I couldn't cast the half rod so I rigged it with the wire leader and big hook.  I retied a treble to the small rod and was on the hunt for bunker again.  I had a very tough time because of the flimsy rod but I was eventually able to snag one.   I switched it over to the shorty rod and let the bunker swim out.  As it was waiting to be eaten, I continued to try to snag with the light rod.

This is probably my favorite kind of fishing.  It's so exciting.  I watched that bait swim out and I just knew that any minute it was going to be under attack.  The bunker started to freak out and that means something is lurking below.  I grabbed the half rod and got ready.  Down it went and there was a lot of splashing and thrashing as my bait was fleeing for its life.  I gave it a couple seconds and then set the hook.  Did you ever try to set the hook from a kayak with only half a rod?  Needless to say I didn't exert too much force.  I pulled and reeled and what was heavy for a second or two suddenly became loose.  I reeled up and on the end of my hook was a bunker head.  The blues love to eat bunker tails.  Bass eat them headfirst.  That's another story.

So now I'm back to square one.  Find some bait, snag one, put it out there to be attacked.  This time I made a modification to my rig.  Attached to my big hook I tied a thick leader with a stinger hook about 5 inches away.  I rigged the bunker with the large hook in its back and then put the small stinger hook in the tail.  Almost immediately it was attacked.  There was splashing and thrashing and I could see my bait escape the first wave.  It was right on top and doing everything it could to escape.  And somehow it did!  I let it sit out there for a good 5 minutes longer just bleeding and barely moving.  How perfect could that be?  Well, while I waited I was able to snag another bunker with the light rod.  This was a nice fresh one - very lively.  I reeled in my battered bait - he was mauled, slashed and cut but still alive.  I took him off the hook, tossed him back and rigged the fresh bait in the same way with the stinger hook.

It was getting dark now and although it had been non-stop action for several hours, these bluefish were beating me.  I hadn't landed a single fish and my rod was all broken up and I was freezing.  Oh, I forgot to mention that at about 7:00 pm it started down-pouring on me.  The rain lasted about 20 minutes so I was thoroughly drenched.  My dad's 'life credo' of "Never Leave Fish" went through my mind several times when I thought about quitting.  No way I was leaving without a fish!

Well - this latest bait was doing its thing when the attack happened again.  Bam, splash, slash - but this time it was really splashing.  The fish was hooked!  I didn't even have to do anything but reel it in.  My stinger hook worked.  It's not easy bringing in a 10 pound bluefish with a half rod - in a kayak.  I got it to the net after being towed around for a short while and the battle was over.  It was dark, I was wet and chilled to the bone, I had my fish - time to go.  Very exciting - all in my backyard. 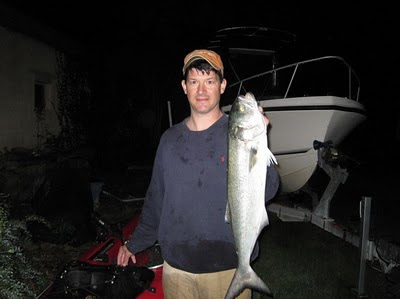 "Never leave fish."
Posted by Doug Peterson at 9:45 AM